Doctors at Indian Hospital and Heart Institute, Mangalore recently performed a rare cardiac procedure that resulted in saving the life of an elderly patient. The complex and high-risk Transcatheter Aortic Valve Implantation (TAVI) procedure was successfully performed to treat Aortic Stenosis along with angioplasty to remove coronary blocks on an elderly person, Ahmed Khan, hailing from Goa, by a team of doctors led by Dr. Yusuf Kumble, Managing Director and chief interventional cardiologist of the hospital.

The patient, who had been suffering from severe aortic valve stenosis with multiple blocks in the coronaries, approached the hospital complaining of chest pain, breathing discomfort and issues related to heart failure. He had earlier approached many hospitals in the region to get treated, but after being told that Indiana is a pioneer in treating such patients, approached Indiana Hospital.

He had already undergone two heart operations to change the valves and remove the blocks in the past. To eliminate the current problems that he faced, he needed to undergo two more operations. It was a challenge to perform another two operations on him as the risk factor is high, especially as he is an elderly person.

Hence, as an alternative, Dr. Yusuf Kumble suggested valve replacement by TAVI without surgery along with removing the blocks by angioplasty. Says Dr. Yusuf Kumble, who is the first in coastal and Malnadu Karnataka region to perform TAVI: “This TAVI procedure was more complicated than normal procedures because a new valve had to be deployed near the old artificial one.”

Dr. Yusuf, who advocates non-surgical option for aortic stenosis in the elderly, took up the challenge of performing TAVI and coronary angioplasty. It may be recalled that Indiana Hospital was the first to perform TAVI in coastal and Malnadu Karnataka two years ago, and since then has performed TAVI on several patients. However, this was the first time that such a complex TAVI was performed at Indiana Hospital, thus creating a milestone in treating highly complex heart diseases.

The patient underwent a 90-minute procedure under local anaesthesia without any pain and was shifted to the ICU for observation for 24 hours. He was discharged in two and a half days. He now leads a normal life, and is hale and healthy.

The patient exuded happiness over the successful procedure, and the members of his family conveyed their gratitude to Dr. Yusuf Kumble, Dr. Manjunath Suresh Pandit, Dr. Siddharth V.T., Dr. Latha R, Dr. Prachi Sharma and the entire team of Indiana Hospital for successfully conducting such a complex heart intervention procedure. Says Dr. Yusuf Kumble: “Age-related degeneration of aortic valve is emerging as the most common cause of aortic stenosis. It is here that TAVI serves as an option for the elderly. And we at Indiana Hospital are the pioneers in that line of treatment.” 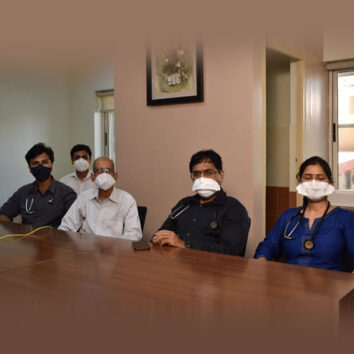